Frau Holda, or Hula is asscociated with the 12 Holy nights. She is seen as the Queen of Winter, and sometimes as the wife of Odin.

Buy this book and support Mindfunda

Holda is the winter Queen, who decides which children have been naughty and nice. A blond woman with blue eyes, she rules the cold and harsh winter. Sometimes she is the wife of Odin, dressed up in Red. 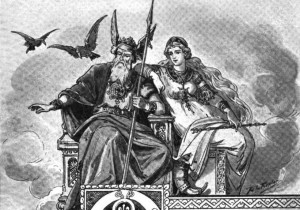 The Grimm story about Frau Holda is a story about a mother with two daughters. One is lazy, one is eager. The Lazy one is loved the most. The other daughter is supposed to spin all day. Her spinning wheel gets blood from the girl’s hands all over it. To prevent her mother from getting really angry with the stained spinning wheel, she throws it into the well. She has to dive into the well to retrieve it. She dives in, and gets into another realm. Lovely, abundant, with breath begging to be put out of the oven and apples wanting to be plucked from the tree. A sort of Garden of Eden in reverse.

Now the good girl enters the home of Frau Holda and does her work, The usual cleaning an tidying. Frau Holda approves and sends the girl back home covered in gold.

The lazy sister also jumps in the well, hoping to get covered in god. She is lazy. She does not harvest, she does not take care of Frau Holda, and she gets covered in pitch.

A story about winter, getting into the realms of the earth and harvesting all it has to offer. A story about judging the work, done in the right way.

Holda and the well

Spinning is an ancient motif, associated with the Mother Goddess. The well is used to clean the spinning wheel, the mandala of the Self, from the blood of the girl. Blood is our life force. Blood is red, the color of fire, the color of anger. It is rather upsetting that the ‘good” girl does not get angry at her mother and sister. Instead, she seems to bottle it all up inside. She needs to search for the Goddess inside the well.

When she jumps in, she enters a paradise with plenty of food. Food that screams to be eaten. In the cold of winter she has discovered a Nirvana. Going down to reach for fertility in the water of the well. Going beyond her anger. Accepting her shadow side, the lazy part of her, that does not care about the work.

Close your eyes and envision your well. See how you can use it as a bridge to the treasures that wait to blossom in a few months. It is not only mundane food that yo are growing now, it is also your spiritual well-being…

Did you dive into the well of wisdom the past days? To harvest what you have learned this year? Did you catch some good dreams too? It is a magical dreaming time so make sure you take notes!

4 thoughts on “Holda and the winter”