In ancient times, an initiate, seeker, or person needing guidance would come before the elders.  The elders were usually six in number and sat in the North. The elders were wise, not only because they had les a long life, but because they knew the inner secrets. They understood the Wolf trails of the mind, experienced many powerful visions and owned their powers and gifts’.
Jamie Sams & David Carson in Medicine Cards

People used to know each other because of the animal their family was associated with. The Raven people, the Wolf men… I used to see hypnagogic images of wolves for a long time when I fell asleep. The elderly people in the tribe as Jamie Sams and David Carson describe it in their book had the ability to tap into the wisdom and power of several animals. Here is how they describe such a council:

‘Picture, if you can, a roaring Council fire and six elders sitting in the North under a new crescent moon. The crescent moon is drawn to the Earth in corn pollen. Three elder men sit on the left as you approach from the South, and three elder women sit on the right. You sit in front of the second, or middle, man. His fierce birdlike eyes hold you like a vise. He holds up a beaded medicine bag or pouch. It is covered in symbols and power designs and it is fringed at the bottom…

The middle man motions you to reach inside. You do so. You pull out, perhaps, a Wolf tooth or a Bear claw. He tells you to place it on the ground between the two of you, in a specific position. You do so. Then you take out other items from the pouch and place them with the first item. Each position or direction has a meaning and each object is a lesson or a talent.

The middle woman looks at the objects you have selected and at the figurations you have placed them in. She begins speaking to you in a soothing voice. She seems to know all about you. She seems to reach inside your very soul. She is a guide and a wise counselor. She is able to tell you if and how you parted from your trail.

The need for this type of guidance exists today. We live in an age that has severed itself from nature and magic. The Medicine Cards are a method for remedying that dissociation.‘
Jamie Sams & David Carson in Medicine Cards

When Stanley Krippner (click here to read more about him) guided me and my fellow students of his two-day workshop Personal Mythology into a guided meditation to meet our power animal I met the deer. 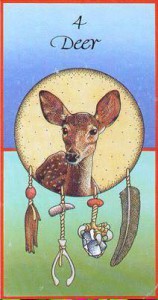 I once had a dream of antlers that were born from my stomach so I already felt kinship with the deer. In my meditate state I ‘felt’ the softness of the skin of the deer while I also felt its strength. The deer could protect itself with the antlers. It uses the antlers to defend but also to connect with a higher energy, serving as a catalyst between heaven and earth.
Jamie Sams and David Carson call this card: Gentleness. ‘Deer teaches us to use the power of gentleness to touch the hearts and minds of wounded beings who are trying to keep us from the Sacred Mountain. If the Deer has gently nudged his way into your cards today you are being asked to find the gentleness of spirit that heals all wounds. Stop pushing so hard for people to change and love them as they are‘.

Animal totem: going back to nature

Did you know there has been a man called Adrian Boshier who went back to Africa and lived the way people did in the old tribes? He connected with the wisdom of animals, plants and stones. In his workshop Personal Mythology Stanley Krippner told us about him.

There is a very good book written about his live that is very worth while to read if you want to know about connecting with your animal totem.

‘Many people identify with a particular plant or animal believing that there is a group spirit or soul, a collective identity that is equated in some way with this totem. “What do you dance?” the villagers asked when Boshier became a part of their lives. At first he did not understand, but later he learned that this is always what people in Africa say when they want to know the origins of a stranger. The replay “I dance the owl” for instance means that the visitor comes from a community that recognizes the owl as its totem and is not only related to the bird, but historically to all the clans which know the same siboko’.
Lightning Bird Lyall Watson

Adrian had a special thing with snakes, the cobra in particular. There was something going on between him and cobra’s. Something beyond words. Do you know that movie about that lady that has to kiss a cobra three times? In this film you can see the magic and the magnetism between the two. You can see the concentration and the care with which the lady chooses her moment.

“In Africa, snakes are regarded as reincarnations of the spirits of the ancestors. Snakes are imbued with supernatural powers of wisdom and the secret of eternal youth. They represent the forces of life and regeneration, exercising a profound influence over fertility and good fortune’
Lightning Bird Lyall Watson

I think, when I was kissed by a snake in my dreams I was reminded of this power element of my totem animal. Like the woman kissing the cobra I was, in my dream, completely fixated at being in line with the snake. Carefully measuring his energy, feeling with my ‘third eye’ to see if it was the right time to come close. Like Boshier I felt my spirits lift and my back straighten. It was like a coming home. What about you? How do you connect with your animal totem?

2 thoughts on “3 ways to look at your Animal Totem”