Remember when you were young? How your history teacher would tell you with radiant eyes- about the Greek mythology? Mythology seems far away. How are mythological stories relevant in your life today? Mindfunda explores mythological themes in 4 blogs

Halloween and the Celtic culture

Today I want to explore different cultural mythologies. Halloween, celebrated October 31st is an inheritance of the Celtic culture. The Celts invaded Europe and brought their own gods and mythology. Rowan Moonstone has written a lot already about the festival of Shamain. The word is pronounced “sow-in”.
The Celts came from Asia and settled in Europe. We can still see similarities between Indian religion and Celtic paganism.
For example, the horned Indian God Siva Pasupati and the Celtic Cernunnos look very much alike.

On the eve of October 31, when the Celtic New year began, the souls of the death  who would still wonder about on the earth, were allowed to come visit their loved ones and say goodbye this night. The veil between the worlds was thin and spirits and fairies roamed the earth this night.

Professor Emeritus of European Archaeology Barry Cunliffe tells in his excellent book “The Celts”: “In the Christian calendar Toussaint (All Saints) follows the ceremony of All Souls 31 October – 1 November, when the souls of the death are said to visit the realm of the living… Liminal interludes were dangerous. They were times when anything could happen and it was only by careful adherence to ritual and propitiation that a precarious order could be maintained. in Irish mythology it is the period when divinities and spirits of the death move from the underworld among the living and sometimes interfere with devastating effect in human affairs. It is this same concept and package of beliefs that comes down to us today in the rituals surrounding Halloween. In the last two decades of the twentieth century, Halloween saw something of a revival in western Europe, largely as the result of a reintroduction of an Americanized version in a form attractive to young children“.

Halloween in the Roman culture

In his ‘Dreamers book of the death‘ Robert Moss* writes about Lemuria. An old Roman religion where rites and exorcism drove the lemures, the wandering evil spirits away by giving them beans. The Vestal Virginis prepared their mola salsa, salt cakes made of the first wheat of the season.

After the church tried to suppress all traces of the old pagan festival by appropriating it; May 13 became All Saints Day, or All Hallows Day. A century later, satisfied that the Lemuralis was history, but troubled that the Celtic Samhain was very much alive, Pope Gregory III switched the date of All Saints Day to November 1.

The feast of Lemuralia lasted three days. The earth was occording to the Romans during three days in May, from the 9th – 13th visited by two kind of souls. The gentile souls who came to guide their offspring: the Lares. And the evil spirits called the Larvae. The evil spirits were fed beans: food for the spirits and driven away with loud noises.

“Ovid reports that it is the duty of the head of a Roman household to get up at midnight and walk around the house in his bare feet tossing black beans over his shoulder and chanting “With these beans, I redeem me and mine”. Family members then turned out in force, clashing bronze pots together and bawling “ghosts of our fathers and ancestor, be gone!” nine times.”
Robert Moss in Dreamer’s book of the death

In the thirties “trick or treat” was played by children in America but it wasn’t untill the fifties that it became populair. Donald Duck, as well as the Peanuts’ strip of Charles M. Scutz refered to it in their comic strips. 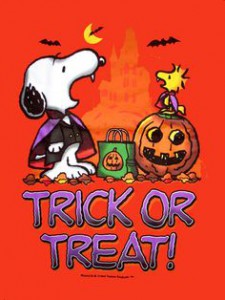 In Europe, when I was a child, we never ever played trick or treat. It was not until the beginning of this century that stores began to sell witches hats and pumpkins.

< Jumped in from elsewhere? Start at  part 1

*In November Mindfunda will review the new book of Robert Moss: Sidewalk oracles. I will use the oracles in the book and write about the synchronicities I encountered so stay tuned!