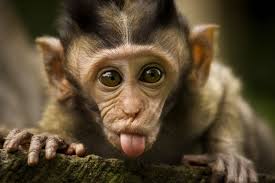 People often learn things without understanding the process. A reasearch with monkeys give us insight into how we decide when the outcome is uncertain. We, as the monkeys use a rational process to increase the chances of success.

Neuroscientist Michael Shadlen researched the way humans and animals use a strategy to make sense of uncertain information. The monkeys in his lab saw two dots on a computer screen, but touching one of them would give them a reward. Shadlen manipulated stimuli to release uncertainty: when a symbol appeared, for example Pac-Man, the dot that would give the rewards was probably the left one, while a pentagon favored the right dot.
The monkeys had electrodes in their brain and Shadlen monitored the neurological buildup, and found out that the decision for a dot on the right or left side was made when activity in favor of the right or left side exceeded a threshold. This experiment tells us that our brain is more rational then we think!