Some people say it was inevitable. A matter of time.  Still, it came as a big surprise for me. A shock. 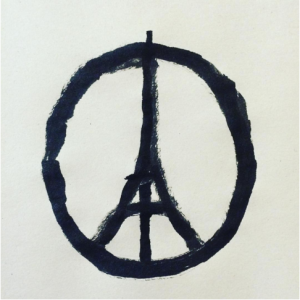 In this cold dark period of time the Paris attack was devastating. The main thing a democracy is built on is trust. Trusting that you will be safe during a football match. Safe during a concert. Safe having a drink. Here is a short video that explains the history of  Syria’s  War

Paris attacks: how did this happen?

No, I don’t want to go over the details of the attack. There are plenty of good articles about that online. I want to talk to you about the forces leading up to this violence. Politics is a major issue: “Lest we forget, the CIA gave birth to Osama Bin Laden and breastfed his organization during the 1980′s. Former British Foreign Secretary, Robin Cook, told the House of Commons that Al Qaeda was unquestionably a product of Western intelligence agencies. Mr. Cook explained that Al Qaeda, which literally means an abbreviation of “the database” in Arabic, was originally the computer database of the thousands of Islamist extremists, who were trained by the CIA and funded by the Saudis, in order to defeat the Russians in Afghanistan“. (Global search.ca)

Religion is another one. Religion has the ability to make murderers out of people. Sad but true: what should be about love and warmth become the only way of living right and deserving heaven. People have killed themselves in the Paris attacks, taking innocent lives with them. In their eye a sure way to deserve heaven.

Something you feel passionate about can make you lose perspective. Even though it seems like an oxymoron: religion and violence always have been partners. Think back at our own history: the crusades military campaigns. Lots of people were murdered to teach them the right way to heaven.

There are clear, identifiable traits in the human character that trigger a wanted response. If a disaster happens somewhere in the world, the photo of a death child is published with a bank account underneath, asking you to transfer money. If you want to create a cohesive group, you regularly show them the suffering and the humiliation of your people.

To kill someone because he does not believe what you think he ought to believe is -however sad- something that happens. Something that regularly happens. Can we as individuals stop it? I hope so, but I am not convinced. I only know that we have to keep trusting, even if it is wrong to trust. Because losing the trust would make us bitter. And bitterness is no good basis for a life.

Paris the city of love, the city of life. I have such beautiful memories of the city. Walking along the Seine, visiting the Eifel Tower. I even made some plans to celebrate the new year in Paris. It is a four-hour drive, and all we would have needed was a bottle of champagne. Now I understand my hesitation.

There is an adorable story that Paris was named after the great Mother Goddess of Egypt. She has an island in the Seine with a temple in her honor.

Dan Brown was the first one who talked about how the church Saint Sulpice was a church rebuilt on the destroyed temple of Isis. Think of this other meaning of Isis when you are looking for the light in the dark days. The city of light is going to shine again.

“Through violence, you may ‘solve’ one problem, but you sow the seeds for another”.

2 thoughts on “the Paris attacks: when the city of light became dark”