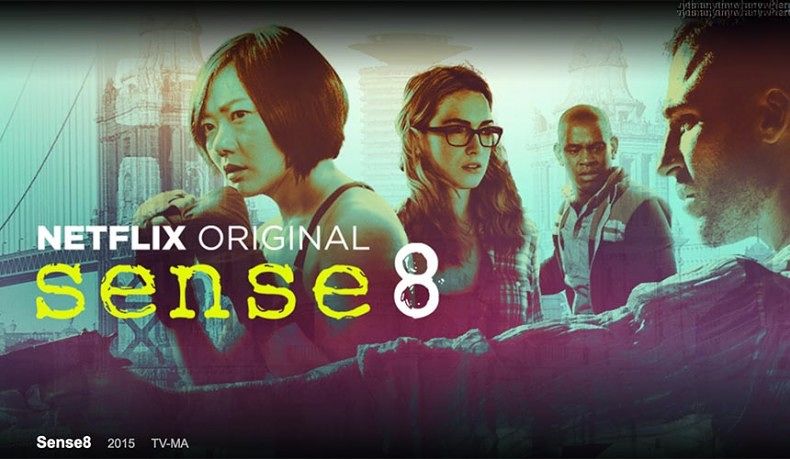 There are eight characters in Sense8, living across the world. If you watch closely you see there is a male and a female version of each character. Here is a trailer that Netflix made that introduces the characters.

Carpeus: a very warm and caring man who associates himself with his big hero Jean-Claude van Damme.
Kala: the female counterpart of Carpeus. She is very mild, very religious. She is also a pharmacist and represents the alchemical notion of the series.

Sun: the female kick ass. She gets into prison for a crime her brother has committed because she once promised her mother to take care of him.
Wolf: the male fighter. He commits crimes but stays out of prison. He falls madly in love with the peaceful Kala.

Riley: a female DJ who travels the world. She once lost her child and husband.
Will: a police officer who is used to playing by the rules. He falls madly in love with Riley.

If you want to use Jungian psychology you might say that the first pair: Carpeus and Kala represent the water element. They are connected with their feelings. More importantly both of them have a reasonably good relationship with their own mother. Carpeus’ motive for plunging into a different way of live was his urge to care for his mother who suffers from Aids.

Sun and Wolf represent the fire element. Sun seems to repress her emotions, but she has the fire to fight for what she believes in. Suns’ relationship with her mother is a rather unbalanced one. Her mother has asked her before she died to sacrifice her own life for the happiness of the males around her. No wonder Sun developed her animus qualities whith such endeavor.
Wolfs’ fire gets him alive out of the most dangerous situations. Like Sun he is a fighter. Like Sun, Wolf is not affraid of confrontations. But he is the first person of the eight hero’s who has a fathership issue: he despises his father.

Lito and Nomi represent the air element. Lito knows how to pretent to survive, how to drive on the wings and be taken were the situation wants him to be. Nomi  has the brains to hack computers. She also has a mother issue: her mother has never accepted her wish to change gender.

Riley and Will are the last two: they represent the earth element. Riley has lost her mother (it begins to sound familiar doesn’t it? In the next paragraph I will explain how eight also refers to the spider, an ancient symbol of the Great Mother). and her father is very important to her.
Will also has a good relationship with his father, they are both cops. The earthly Will follows the rules but needs to bend them ever more. Because of his need to fix things he falls in love with the lovely Riley who seems to be in trouble all of the time.

Sense8: number 8 as a symbol

There are eight main characters in Sense8. The number eight is the atom number of oxygen. Oxygen is an essential part in the process of getting energy in your body. Energy you need to make changes. All of the main characters are in a dead-end situation in their life and need some energy. As Stanley Krippner and David Feinstein wrote in their classic book Personal mythology: “When your experiences and your myths do not correspond, there are two basic possibilities: alter your perception or change your myth”.

A spider has eight legs. The spider is an ancient symbol of the mother Goddess. The Navajo and Hopi Indian tribes believe the world was created by a spider. This mythological mother motive is represented by the character Angel. Angel gives birth to all eight of the sensates in the opening scene.

In our society science is the new religion. But science seems to kill off our need for magic. Our need for connection. The need for connection in our society has grown. After industrialisation, most of us live in a large community, but have little close friends. This innate sense of connection is taken to a new heroic level in Sense8. The main characters save each others lives multiple times. You see Sun saving the live of Carpeus in a fight of live and death, you see Wolf saving Lito and vise versa.

Science is represented by the company BPO: Biologic Preservation Organization. The main villain of the series is Dr. Metzger. If he looks one of the hero’s in the eyes, he will know their minds.  His aim is to destruct free will. He wants to manipulate the eight sensates. Often, in Sense8 – like in real life- there is no telling who is on the “right” side and who is wrong. Because Dr. Metzger also has a counter part. The lover of the mother of the sensates: Jonas. He is able to connect with each of the characters in Sense8 to give them guidance. But is it for the better or is it for the worse? This issue of trust is very significant. We live in a society were science has taught us to question everything. It is a big responsibility. It increases our longing to be surrounded by a tribe of people we can trust.

Finaly the ease with which Sense8 addresses homosexuality and introduces a transgender as a main character is worth a big round of applause. Finally in June 2015 marriage between gay people was legalized in the United States. Sense8 is really a mirror of the time we live in.

Please sign up for my YouTube channel to enjoy all the beautiful Mindfunda interviews with inspiring people. People like Jean Benedict Raffa, Anne Baring, Connie Kaplan, Ralph Metzner and Stanley Krippner. I will be uploading an interview with P.H Awater about near death experiences very soon so be sure to sign up!

1 thought on “Sense8: a mythology of connection and magic”