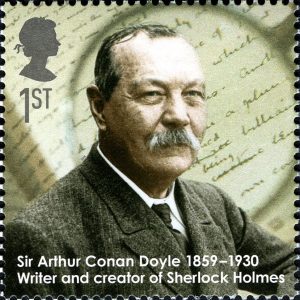 Conan Doyle and the paradigm

Conan Doyle was trained as a medical doctor. A scientist. Most of us know him from the stories of Sherlock Holmes. Sherlock has been the hero of scientific thinking. The phrase “Elementary, my dear Watson” is well-known even though Conan Doyle never used this phrase in books. But in films it was the onset of a rational explanation of strange and nearly unsolvable murders. Conan Doyle’s Sherlock is the model of current popular television series like House Md. and The Mentalist.

But Conan Doyle had a craving for the paranormal. He was “increasingly drawn to spiritualism, for which he became a high-profile advocate, to the point, many observers believed, of utter self-damaging credulity” (page xiii).
This clashing between rationality and spirituality is still at the core of lots of modern disputes.

Kuhn and the Paradigm Shift

It was Thomas Kuhn who proposed in his book Structure of Scientific Revolutions, that science has a paradigm, an arrangement of the universe that most people agree upon. Every once in a while, that paradigm shifts, because someone discovers something that makes the paradigm shift to another one. Newton did just that in his days, Einstein shifted the paradigm too.

We believe in a rational world, where everything can be explained. It is a safe, but rather dull world with no, or little room for magic. And that is what makes this book so interesting. It is written by a man who had a rational trained mind, but who craved some magic. I can relate to that. My mind craves magic too.

You can see the conflict between rational world and spiritual mind reflected in the battle between Sigmund Freud and Carl Jung. Where Freud always remained the scientist, Jung embraced the spiritual end of the current continuum.
This book is very interesting because the same conflict resided within Conan Doyle and Gothic Tales revolve around this conflict between rationality and spirituality.

John Bowen Professor of Nineteenth-Century Literature at the University of York about the Gothic Genre: “Gothic is a world of doubt, particularly doubt about the supernatural and the spiritual. It seeks to create in our minds the possibility that there may be things beyond human power, reason and knowledge. But that possibility is constantly accompanied by uncertainty”. (www.bl.uk/romantics-and-victorians/articles/gothic-motifs#authorBlock1).

You get 34 mysterious packages that are telling you about strange events in strange places and suggest a spiritual solution. But leave room for the rational one. It is a nice and fun exercise. Conan Doyle is a gifted writer and you will be entertained.

The book has a selected number of stories which give you the opportunity to really get to know this fascinating man. For example, “The Captain of the Polestar” is loosely based upon his years as a ship doctor. “Through the Veil” introduces you to his infatuation with parapsychology, reincarnation in particular.