Mindfunda was invited by Cultura to give a presentation about dreams and art. Cultura is the municipal art gallery and theatre in the Dutch town of Ede.

Van Gogh wrote in a letter to his brother Theo: “The sight of the stars makes me dream”. It is commonly accepted that dreams are creative so the fact that van Gogh got his inspiration by looking at the pictures of his dreams makes common sense. But in 2009 there was scientific proof (Mednick et al) that dreaming induces creativity.  In a research people had to do a creative test: they had to couple three words with a fourth that matched. For instance: the words heart, sixteen and cookie had to be matched with the word sweet. In the research only the group that had enjoyed REM sleep improved their scores on the creativity test.

Pianist, writer and painter David Dubal talks about how he uses his dreams as inspiration. He uses dreams to solve problems and to get inspiration. He even had an exhibition from paintings that had been inspired by dreams. In this film you can hear him talk about the importance of dreams for creativity.

There is one very important thing David Dubal says in the YouTube film. One thing that defines creativity. Sitting in the subway, I break the unwritten rules by looking at people”. Breaking the rules. Looking at things from a whole different perspective. Let’ s explore the life of Vincent van Gogh to see how many times he broke the rules….

Well, we can all agree that Vincent van Gogh broke a lot of rules. His creativity was key in finding new ways to explore when things fell apart.
In one of his letters to his brother Theo he wrote: I dream my paintings, and then I paint my dreams”. Given that research has indicated that REM sleep enhances creativity, let’s interpret Van Gogh’s Starry night as a dream also read my Mindfunda about Starry night.

Since the seventies of last century we are used to see a dream as a representation of one’s own mind. It is perfectly reasonable how that assumption came into being. A new generation wanted to get rid of the bearded professors telling people what their dreams meant. They successfully seized power: a dream is about you and only you. I disagree with that because I think human beings are social people who are custom-made to live in tribes. So dreaming about another tribe member is natural (also see my experiment in mutual dreaming described in my e-book). But if this painting is a dream of van Gogh, what does it tell us about van Gogh?

What is the first thing that stands out in this picture? The Nebula that seems to divide the painting in two. If you look at your dream, first look at its day residue so you are able to explore pure symbolic things more in depth. Things you do during the day get into your dreams.
Looking at this painting, the brilliant piece of Albert Boime gives a hand at distinguishing the real facts from the symbolism in the painting. Albert Boime carefully esearched the sky and found out it was an almost accurate representation of the night sky in Saint-Rémy. Accept for two things. Two things we can interpret symbolically. One is the spiral nebula that divides the painting in two parts. Vincent had not seen this in 1889. In 1880 this picture, taken by Henry Draper of the Orion Nebula was published and caused quite a sensation. Astronomers at that time assumed that a star was born in the middle of the nebula.

A star being born…. It is not a surprise that Vincent van Gogh got his first exposition nine months after this painting. The time it takes for the star being born to mature. And one month later he got his second exposition in Antwerp. That is where he sold the only painting he ever was going to sell while he was alive.

But there has got to be a better way to use the creativity in your dreams. We don’t want to break the rules the way van Gogh did. And we don’t need to. Salvador Dali was very succesful while alive using his dreams in a completely different way.  Let me tell you how he did it.

Dali’s method involved a chair that was not too hard, but not too comfortable either. (It had to be a Spanish chair, off course). A plate, a key, and olive oil. Dali rubbed his wrists with olive oil. He held a large key in his left hand, between his thumb and his forefinger. He relaxed, closed his eyes and when the key hit the plate he was awake. Using this method he made the most extraordinary paintings.

Once a month he took out a whole afternoon to get inspired by dreams and he had a special menu. He ate 3 dozen sea urchins that had to be selected two days before the moon was full. He drank a glass of young white wine, and did not leave his room untill he had an inspiring dream.

You can see the chair he used for his daily dream routine in Alfred Hitchcock’s Spellbound starring Ingrid Bergman and Gregory Peck. In this film he got the opportunity to demonstrate how important dreams can be as a tool for creative problem solution.

There is yet a third way to use dreams to enhance creativity. Where van Gogh used ways to explore other options and Salvador Dali used dreams as a way to guide him through his career path, artist Brenda Ferrimani uses dreams in a third way. She dives into the confrontation van Gogh walked away from. She used dreams to dive right into the conflict (Read a Mindfunda blog by Brenda Ferrimani here). 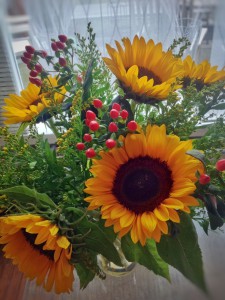 2 thoughts on “3 ways of being creative like van Gogh”