Today I celebrate the #100th blog post of Mindfunda.
The number 100 is a special number. All ratios can be brought back to 100 using a percentage. 100 was considered to be the desired age for a human being in the bible. 100 represents eternity. (Don’t worry, I don’t plan on writing for Mindfunda that long).

Behind the scenes of Mindfunda the blog 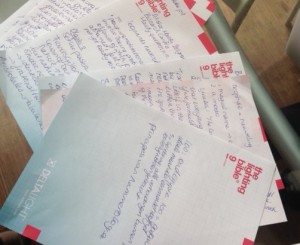 I call Mindfunda the walking website. Because after I have done all this work I usually walk. Nothing can bring notes and thoughts more into perspective then a walk, while thinking about what I want to say. I think about how I am going to say it, why I am going to say it and why my readers would want to read it. I think my Ray Kurzweil post is one of my favorites. I put so much effort in researching Kurzweil (I really got to like him), his life, his determination, his brilliant mind that I had to contemplate how to convince you of his brilliance without coming across as a love-sick puppy.

My post about a dream that alerted the dreamer to a heart condition is one of the most visited posts, according to statistics. We live in a time that many people suffer from heart conditions.

After two months of blogging I wanted to publish an interview. Being a book addict I wanted to let writers tell about their books. I wanted people to engage with them, like them, see them, hear about their struggles, their solutions, their happiness but also about their failures. Because failing is not a problem. Failing is a side road to success. I created a YouTube channel for Mindfunda.

One of the books that had intrigued me the most was Dream of the Cosmos written by Jungian author Anne Baring.

In April 2015 I taped the first Skype interview with non other than Anne Baring. She, in my eyes, is a star. Having read her “Mythology of the Goddess” I was severely impressed with the intellectual depth of this lady. She has read so many old books about Kabbalah, about Sacred Geometry, she traveled the world: she is like an intellectual rock star to me. After emailing her she agreed to an interview on Skype. I was jumping tables, filled with joy. Unfortunately she had to cancel the interview. Twice. That is not good for your self-confidence. At an earlier age in my life, when I was about eight year old I really wanted to be a journalist. And interviewing people comes close. So having interviews cancelled for any reason is not good for your self-esteem. And she mailed me she did not like my questions. So I decided to jump in at the deep end and skip the questions but to ask her to tell about subjects. She agreed to that (and now you know the reason why I do not talk very much in that interview). But she was indeed my intellectual superstar. She gave such an inspiring talk that I was glowing with enthusiasm after I hang up the phone on Skype.

I usually give the authors my questions at least a week before the interview, so they can prepare. I like to start with a personal question about a dream, or a life changing experience. Most viewers don’t look long at interviews so you have to catch them early on to capture them. So that personal question, where the interviewees show a vulnerable, likable side of him or herself is very important.
When the introduction is done, my job as interviewer gets a bit harder. I have to listen, I have to scan the answers to see if the people watching have gotten an answer, and I have to prepare the next question in my mind. I can tell you that is a lot of work. I am not very good at multitasking…

The interview that surprised me the most was that with Ralph Metzner. He was in a good mood during our Skype conversation. We had a time mix up being 10 hours apart, I called him too late or he called me too early. But he gave an in-depth analysis of Western culture. He talked about Russia, with its Bear totem animal. He talked about ancestry, about Odin. And when I closed the interview after 50 minutes he said surprised: “Are we done already?”

Robert Waggoner was a delight to interview. I just admit to you that I am no good at multitasking and Robert thought along with me. He recommended research, he gave reading tips, he summarized.
I called him in his early morning and he was sharp. He is an early bird.
I did not have my headphone working while I did the interview with him, that is the reason I edited myself out of the video. And besides, Robert is far more interesting when it comes to lucid dreaming. I only have about 3-5 lucid dreams a month so I do not consider myself to be an expert on the subject.

I was so glad when I saw one of my friends on Facebook was a friend of Connie Kaplan. Her ‘Woman’s book of Dreams’ influenced me very much. We could have talked for hours. But keeping my interviews around 50 minutes is my aim. Preferably shorter, twenty minutes would be my favorite length. Experts say an ideal interview just lasts about three minutes. Connie talked with ease and felt really comfortable. She displays so much joy and wisdom in her film that you have got to fall in love with her.

I was really afraid that Jean Raffa would be far too busy to be interviewed by me. I heard such good things about her books especially ‘Dream theatres of the Soul’ and the ‘Healing the Sacred Divide’. But she was delightful, down to earth, but jet very spiritual. But she was happy to do the interview, even at a time when she was occupied with her keynote speech for the International Association for the Study of Dreams (IASD) annual conference where she was invited to be the keynote speaker.
I usually engage in a talk before I do the interview (I edit this part out) and we discovered we had mutual Facebook friends and that we both had this longing for a spiritual depth that we could not fulfill using the traditional spiritual methods. So I ended up telling her everything about my “Reading the Red Book project” something I am working on now. I use the Red Book as a tool to incubate dreams to guide my own inner experience of religion.

The last interview I uploaded (I have not uploaded my interview with PMH Atwater yet) is that of Stanley Krippner. Stanley is a highly intelligent man who always impresses me with his knowledge of books and research. There is no subject to be discussed with him, or he can give you a good book written about it, or some excellent research for you to read. The only thing he is not able to give you is the ISBN number of the book. The interview went very well even though he was very hungry (It was his one-o-clock that I interviewed him). During this interview he showed a magnificent shamanic drum he once got, I was very impressed by it.

Now I am busy editing PMH Atwater’s interview and preparing questions for Catherine Wikholm who is one of the authors of the Buddha pill.
PMH Atwater is a writer and dyslexic, a combination that is very impressive. During our interview she was very direct, very scientific and very down to earth. The thing I had to get used to is that she likes to be called PMH. She considers that to be her first name. It was easy to get used too, because I became quite charmed with her energy. She has been researching near death experiences for a long time. Like Jean Raffa, she is has re-defined her personal religion. Now she is searching for people who had a near death experience at an early age and she does an appeal to you to connect with her and tell her your story if indeed you had one at an early age.