I recently watched the Matrix trilogy again, here’s my Mythofunda approach on it:

Oracle: “Do you know what that means? (points at banner with Temet Nosce on it). It means know thyself. I want to tell you a little secret, being the One is just like being in love…”

In 1999 the Wachowskis, two siblings, directed The Matrix. It is a story about a hacker named Thomas Anderson. Thomas is the name of the disciple that did not believe Christ was resurrected. Doubting Thomas is an expression that is still being used when someone refuses to believes the miracle that happens. In the Gnostic Gospels Thomas knows Jesus and says he will believe it when he sees it. And it hits the most important nerve in the spine of the story: it explores the tension between ratio and magic. The Goddess holds the key to the solution. Thomas has a second identity: Neo (new, a computer hacker). Neo is an anagram for the One, the person we become when we have accepted our shadow. 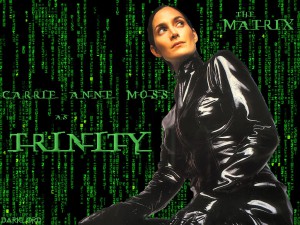 The Goddess, as she appears in the trilogy of The Matrix (1999), Matrix reloaded (2003) and Matrix Revolutions (2003), has three faces. The fertile young sexy feisty Trinity, the black Penelope queen of the underworld and the all knowing Oracle.

The first scene of the film opens with the Goddess. Trinity’s voice talking to Cypher. Numbers run across the screen so we, the viewers are in on the secret: we live in a computer simulated reality.

Trinity is facing the wall, behind her laptop. A very accurate description of the society we live in. Computers being machines based to calculate, the Goddess can operate them but she is at the same time inviting Neo “to follow the white rabbit”. The rabbit, in many cultures is associated with the moon. The rabbit pours the elixir of life for Chang’e, the Chinese moon Goddess. In the poetry of Chu Chi, the rabbit on the moon pounds herbs for the immortals. And the legend was told in a conversation between Houston and Apollo 11 before the first moon landing. Houston said: “Among the headlines concerning Apollo this morning is one asking you to watch for a lovely girl with a big rabbit. An ancient legend says a beautiful girl called Chang-O was banished to the moon because she stole the pill of immortality from her husband. You might also look for her companion, a large Chinese rabbit, who is easy to spot since he is always standing on his hind feet in the shade of a cinnamon tree”. (source Wikipedia).
And indeed Trinity invites Neo to look at the moon: they fall madly in love. When Neo and Trinity first meet she nails down that uneasy feeling we all recognize: what is reality?

The name Trinity refers to the triple Goddess: the Maiden, the Mother and the Crone. We see Trinity as first lady in the film, and she plays the part of the Maiden. Persephone in the film, who is jealous of the love between Trinity and Neo, demands a kiss from Neo to help him free the key maker. The key maker in the movie can open doors to new computer realities.

So the mother – daughter roles are reversed. In Greek mythology Persephone always was the daughter, now she acts like the Mother Goddess, demanding love as the way out of a reality that is not fulfilling your needs.

The Crone in the movie is the Oracle: the old housewife, making cookies with a clairvoyant ability: “do not worry about the vase” she tells Neo before he accidentally throws down a vase that breaks. The vase holds water: a symbol for spirituality. The fact that it breaks is a referral to the death of Trinity in the third part of the trilogy. Once Trinity is dead it starts to rain. The water, symbolised by the rain refers to the water that makes life possible. One of the most ancient Goddesses are water goddesses. Nature goddesses that need to be balanced in order to bring propsperity to all living beings. Death brings new life, the circle is round…

As the dark twin brother of Neo, agent Smith says: “Every mammal on this planet instinctively develops a natural equilibrium with the surrounding environment but you humans do not. You move to an area and you multiply and multiply until every natural resource is consumed and the only way you can survive is to spread to another area. There is another organism on this planet that follows the same pattern. Do you know what it is? A virus. Human beings are a disease, a cancer of this planet. You’re a plague and we are the cure”. Now that is a very eloquent description on the shadow we human beings bare today. Every human being that is aware of its environment knows that we created our own paradise, but in ways that undermine our earth, our health and our mental well being. There is one thing that speaks for us as a species: our ability to dream.