Skip to content
Home »Brainfunda»Oliver Sacks, the man from Awakenings, about dreaming

Oliver Sacks, one of my hero’s died August 29 2015. Almost all of us know him from the film ‘Awakenings‘. Using L-Dopa, a precursor to dopamine that is able to cross the blood brain barrier where dopamine is not able to do so. People up who had been in a coma for decades woke up.

But what did neurologist Oliver Sacks – the man who wakes people up – have to say about dreaming? 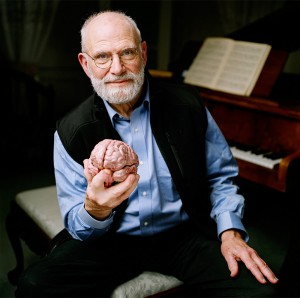 In the book Trauma and dreams edited by Deidre Barret Oliver Sacks wrote:
‘It is scarcely surprising that neurological disorders can alter dreaming either quantitatively or in striking and specific ways. Every practicing neurologist must be aware of this, and yet how rarely do we question our patients about their dreams. Though there is virtually nothing on this subject in literature, I think such questioning can be an important part of the neurological examination, can assist in diagnoses, and can show how a sensitive barometer dreaming may be of neurological health and disease.

Working in a migraine clinic years ago, it became clear that there was not only a general correlation between the incidence of very intense dreams or nightmares and migraine aura’s but also, not infrequently, an entering of aura phenomena in dreams.
A patient who had focal sensory and motor seizures once dreamed that he was in court, being prosecuted by Freud, who kept on banging his head with a gave as the charges were being read’.

So just like Kasatkin, a Russian psychiatrist who wrote A theory about dreams, Oliver Sacks sees dreams as important for your physical health. Dreams usually give a non symbolic representation of physical problems. Probably because there is a big trauma to the body. When people start to dream in symbols again usually they are dealing with their trauma’s. Aura’s of migraine in waking live turn up as aura’s in dreams, Freud hits a man with migraine on the head (as if to say: ‘will you listen to your dreams now?’).

In a footnote in his book An Anthropologist on Mars Oliver writes:

An Anthropologist on Mars

Rodolfo Llinás and his colleagues at New York University, comparing the electrophysiological properties of the brain in waking and dreaming, postulate a single fundamental mechanism for both — a ceaseless inner talking between cerebral cortex and thalamus, a ceaseless interplay of image and feeling, irrespective of whether there is sensory input or not. When there is sensory input, this interplay integrates it to generate waking consciousness, but in the absence of sensory input it continues to generate brain states we call fantasy, hallucination, or dreams.
Thus waking consciousness is dreaming — but dreaming constrained by external reality. Credit: gautel.net
And here science meets the ancient presupposition of Dream Yoga, that dreams introduce us to other dimensions of experience. Dreams can be seen as a form of hallucinations, with the brain deprived of sensory input and motor output.

Oliver Sacks was one of the most compassionate doctors of our time. It was his gentleness combined with his sincere care about the well-being of his patients that made him stand out from other neurologists.