The Shaman is usually the Wise Man, who has the ability to travel to different realms of being to guide his tribe through difficult times. A healer, a wise man, a trickster sometimes, if that is necessary for the healing of a soul. Shamanism is the oldest religion known to men. Well, actually the first religions were animist, a religion that attributes a soul to plants and objects. But that is a shaman way of thinking.

The shaman is male

Most of us are familiar with the concept of a guy-shaman. Think of Michael Harner’s

Core Shamanism as he has described it in his book “The Way of the Shaman“. Think of the Shamanism of Robert Moss, who modernized the concept in a professional manner. Think of Michael Smith, Ph.D. (aka Mikkal) with his Crow’s Nest. You know what they have in common? They are all men. Wise old man. Even though in ancient times there where many female Shamans. The word shaman derives from the word ‘Shamanka’, a female shaman.

“The Goddess and The Shaman, The Art and Science of Magical Healing” isn’t a historical document about female shamans. If you are looking for that you should try a classic like “Woman Shaman’s Body” written by Barbara Tedlock Ph.D.

The Goddess and the Shaman is a personal story of a woman, taken over by the voices of the Elphame, The Elf World. 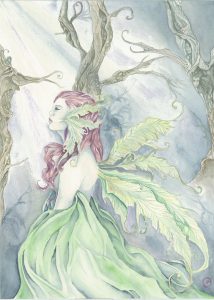 Kent describes how she became “taken over” by the other realm, the Elphame and had what she calls “an Ontological Shock”. She writes: “When the path found me, I discovered that I had a surprising array of psycho-spiritual abilities that emerged fully formed. It shocked me, frightened me, and caused me to doubt to doubt my sanity”.

She goes on to describe a process of Out of Body Experiences that occurred as epileptic seizures during nap time. Because her brother had read Monroe’s “Journeys Outside of the Body” and lended his copy to her, she began to feel more  confident. She was not the only one experiencing this. She began to experiment, to travel outside her body.

The way to get to the Elphame is to perform a ritual. Rituals are very beneficial for the human psyche, as research has shown. Rituals create a doorway to the Elphame. Going to your therapist each week is a form of ritual. Going to the doctor is a form of ritual. Each ritual has its dedications, its energy, its own sacred language. The ritual circle is discussed but there is also the warning to protect oneself for bad entities.
But most of all, the ritual of re-connecting with nature is emphasized. There is a link to ecopsychology, that I had never heard of and seems very interesting. The view on “madness” is examined through stories of her patients. She shares a lot of personal dreams visions and experiences with her third vision.

What I like about the book is that the Goddess speaks to J.A. Kent in dreams. Dreams are the door to what Kent calls “The Elphame”.
I also like the very personal writing style of J.A. Kent. She talks about how her experiences made her question her mind. Being that vulnerable in a book takes a lot of guts.

This is a really informative book that gives you lots of insights into shamanism and into the pagan revival of the goddess. An important revival of honoring the female energy in a predominant male oriented society.

I was a bit disappointed about the information on how to reach in for your inner goddess. Do not expect this to be a workbook. It is more a personal story, filled with information about the goddess and its manifestation forms.
The way J.A. Kent leans on the Core Shamanism principle as defined by Michael Warner is either a big complement for his ability to reach his inner goddess, or a lack of creativity in J.A. Kent. If you dedicate a book to the Goddess and the Shaman, why not take the female line of shamanism. The Chukchee shaman women, or the Chinese Wu, or the Artemis Perasia in Anatolia, ancient Turkey  for example. Maybe that will be a subject for a next book.

Do you want to learn more about the Mythology of the Goddess? Enroll in Mindfunda’s Mythology course. An online course that will help you understand the mythology in your life and in your dreams.