In my online course Norse Mythology (there is still time to sign up, we just started yesterday) we will focus on the energy of Odin from March 27 – April 3 2017.

Now this is not a tarot course. But there is a strong connection between Odin and the tarot card of the Hanged Man. This is something that my dear friend Deborah Gregory  said in one of her comments on Mindfunda (I love all the people who take the effort to write a comment, I learn a lot from you).

One of the meanings of Odin’s name is Poetry, and Deborah happens to write poetry about the meaning of tarot cards. That is synchronicity waving hello and kissing you on the cheek isn’t it? So I decided to dedicate this post to the Hanged man in the tarot. 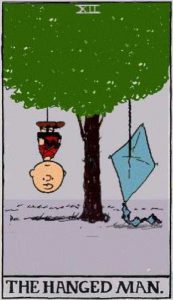 You might know that the tarot represents the journey of life. And sometimes you are trapped in this situation. As Jung once said: “the unconscious always tries to produce an impossible situation in order to force the individual to bring out his very best”.

But why did Odin, Father God of the Norse mythology, feel the need to hang himself upside down on the tree of life for nine days, stabbing himself with his own spear?

“The Speech of the High One”

I know I hung on that windy tree,
Swung there for nine long nights, Wounded by my own blade,
Bloodied for Odin,
Myself an offering to Myself:
Bound to the tree
That no man knows
Wither the root of it run.

None gave me bread,
None gave me drink.
Down to the deepest depths I peered
Until I speid the Runes.
With a Roaring cry I seized them up,
Then dizzt and fainting, I fell.

Well-being I won
And wisdom too.
I grew and took joy in my growth:
From a word to a word
I was lead to a word,
From a deed to another deed.

Tarot Card the Hanged Man and the Tree

There the man is, hanging upside down. In order to satisfy an urgent inner need for knowledge. Did you ever notice how we are trees walking upside down? Our roots are our brains. Odin had his brain near the root of the Life tree.

Trees take carbon dioxide out of the air and distribute oxygen, human beings do exactly the opposite. So being upside down on a tree makes a lot more sense than you would have imagined at first glance. 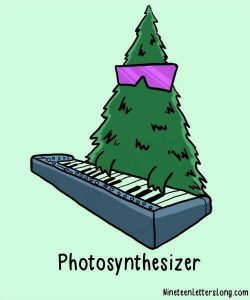 So it was knowledge beyond this world that Odin was looking for. How is that represented in the tarot card of the Hanged Man?

The only thing to do is to surrender. Struggling will only wrap you up more tight. We are always defined by the things we believe in. Consciously or subconscious.

And like Odin, we all need to investigate if our basic assumptions really represent the things our soul longs for.

And dreams are a way to uncover that meaning. The Norse Mythology course gives you an incubation dedicated to a Norse God each week.

Freya the Vanir Goddess, Odin the Aesir Got, Loki the half god half Gaint and the spiritual realm that we are going to visit using lucid dream techniques.

Site of Dutch psychologist Susanne van Doorn. I try to write a Mindfunda every other day.