This year, now we have been in isolation for so many months, we crave connection. Join us for a Christmas celebration filled with mythological stories and dream incubations. If you sign up now for the Silver or the Gold package of the Holy Nights 2020-2021, as a bonus you get free access to the Winter Solstice Event on December 21 , a $19 extra, including a special audio / video incubation.

This special evening, when Saturn and Jupiter are so close they shine as bright as the Christmas Star, we will drink the Mead Of Poetry together and read all about how Odin used his tricks to get this liquid.

Each year Mindfunda organizes the Holy Nights Event. Every year a particular winter God or Goddess guides us through a spiritual journey that prepares us for the year ahead. This year our guide is Wotan also known as Odin.  He will lead us through the nine worlds of Yggdrasil, the World Tree. Each of the twelve days corresponds with a particular month of the coming year.

In the bottom section you can sign-up, or click here for the event page with al packages explained.

Here is the schedule for this year, to give you a glimpse on what to expect:

We will start upcoming December 24 2020, sign-up is open.
Wotan or Odin as I will usually refer to him during this event, is known for the Wild Hunt. In Germanic countries, during Yule, December 21, the shortest day of the year. Wotan rides through the sky with his company of ghosts. Driven by the wind he rides through the sky and if you are unlucky enough to see them ride, you will have to join them…

It was Thomas Nast, born in Landau Germany, who emigrated with his mother to America and when he was grown found a job at Harper’s Weekly that launched the image of Odin as the obese elf we know today.

The second night we will be hanging around the Christmas tree with Odin. Norse mythology has two main sources. One of them is the Codex Regius, also known as the Poetic Edda. It is a collection of 31 poems written in the 13th century. They were found on a farm and given to the bishop who gave them to the Danish King.
The second source is the Prose Edda, written by historian and politician Snorri Sturluson. A poet in service of the king, a royal spokes man. Snorri got mixed up in political plans to dethrone the king and in the end was murdered because of it. This night we will dip our toe in the Nordic poetry and explore the Yggdrasil, the tree of life. 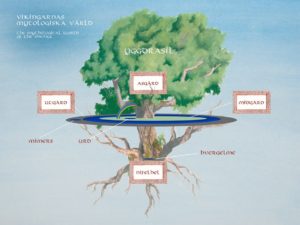 The third night we will be on our way to the Well of Mimir, the well of memory. Mimir is a giant who lives in Jottunheim, the world of the Giants. There are nine worlds in Yggdrasil and Odin is able to travel to all of them, riding his magnificent horse Sleipnir. This night we will solve the riddle given by the wise giant Vafthrudner. Odin needs to solve this riddle to know beforehand what will be the price that Mimir is going to ask for a drink out of this Well. In the incubation you will concentrate on the riddles that are in your own life right now. What do you need to solve using your wit and cleverness?

The next night Odin goes to the well of mimir, willing to sacrifice his vision. All magic requires a sacrifice and Odin gives up his eye. This night we will focus on changing our perception about ourselves and our lives by connecting with our ancestral wisdom. Maybe you are lucky enough to have grown up in a loving supporting family but most of us have some internal wounds that come from our childhood. Recent research has also indicated that trauma can be inherited throughout generations. By connecting with your inner source of ancestral wisdom you can feel the energy of your father, mother, grandparent and their parents and how they all gave the best they could. It might not have been what you needed, but everyone tried. If you squeeze a lemon, the juice will be sour. This night is about accepting the wealth and the depth of your ancestors to change your self perception. 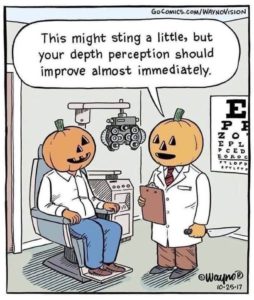 In the fifth night we will focus on a story about two princes that Odin and Freya brought up. Odin is an Aesir God of the Wind who prefers the hunt and the battle. Freya is a Vanir Goddess of the Earth and prefers plant magic. Both raise a son in their own way for a year and sent them back to their parents. Years later, Odin visits those brothers again and sees how one of them completely has identified with his animal side: the wolf.

Wolves play an important part in Norse mythology. You have Fenrir, the wolf who will eat Odin at Ragnarok. Ragnarok is the end of the Gods. When Ragnarok comes, a battle will begin: the old gods will die and make room for the younger gods. Odin’s place will be taken over by Baldur, his son with Freya and the God of light.
But Odin also has two wolves by his side: Geri and Freki. He feels them every day. Rumour has it that Freki is the same wolf as Fenrir.

In the sixth night, when we will dream about June we will hear something about the Norns. Three sisters Urd of the past, Verdandi of the present and Skuld of the future. The Norns weave the web of live and are present at each birth. This night you will focus on your destiny. Nobody, not even the Gods can escape destiny. To accept this, you need knowledge about how to act in a way that is in line with your soul and wisdom to accept the cards that you are dealt with.

The next night you will learn a bit more about the runes. The Norns cast the runes and read them. I have taken the runes from the elder futark and will share them with you. From the different kinds of runes this is is the earliest form of runes that appear, and I am most familiar with these.   This day I will share a story about how the power of the runes can be misused: Egil’s saga. 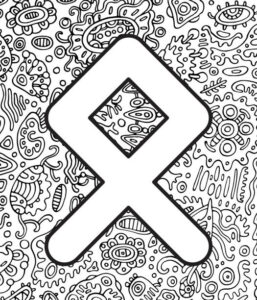 In night eight, that is going to be January first 2021, we will read about the dream of Baldur. If you join this course it is because you love dreams and their wisdom. Baldur is the God of light and the favourite son of Odin. Again this is a story about the wisdom one needs to accept one’s fate. The poem I share with you this day has all the ingredients of grief and how to deal with it.

In night nine I will tell you about Draupnir, the magic ring of Odin. Made by the dwarves it has the magic quality of producing eight other rings ever ninth night. It is made by two brothers: Brokk and Eitri who are tricked by Loki into a bet. Loki is the great trickster but this time, the magic of the brothers is so good Loki nearly loses his head. Loki only gets saved because he is Odin’s blood brother. In the incubation of this night we will focus on exploring the nine worlds of Yggdrasil by stepping into each ring of Draupnir.

What would a Holy Night’s event be without the valkyries? In night ten we will learn about the servants of Odin who are there whenever there is a battle to take the warriors who are worthy enough to the Valhalla.

When we are almost at the end of the Holy Nights, in night eleven, we will explore the animals of Odin. Because of his closeness to animals Odin is often seen as the shaman. I have put the animals in alchemical context: the wolves Geri and Freki, his ravens Hugin and Munin, the two swans at the root of Yggdrasil, the eagle on top of Yggdrasil and the four stags at the bark off the tree.

The last night we will read about Sleipnir. The magic horse with eight legs who can travel to the worlds beyond vision. We started with the Great hunt when Odin/Wotan rides the sky with his company of ghosts and now, in our dream incubation we will join him on a nightly adventure.

We hope to see you at the Holy Nights Event! Sign up now.